Chiropractic care has several benefits for hockey players. It helps to aid in recovery from head trauma and concussions. It also helps players recover from strains, sprains and contusions. The many collisions players endure during the game can produce a myriad of injuries as well, and chiropractic care is integral in post-game recovery.

Sidney Patrick Crosby is a Canadian professional ice hockey player who currently serves as captain of the Pittsburgh Penguins in the National Hockey League (NHL). Back in 2012, however, Crosby was suffering the prolonged effects of two concussions received within days of each other. After ten months of dizziness, fogginess, instability and light sensitivity, Crosby turned to Dr. Ted Carrick, a chiropractic neurologist, for specialized chiropractic care. Six months into chiropractic treatment, Crosby returned to the ice and was signed to a 12-year contract.

Crosby isn’t the only hockey player to attest to the success of chiropractic care in treating (and preventing) injuries on the ice. Mike Modano, a first-round draft pick in 1988 and now a Hockey Hall of Famer, advocated for chiropractic care during his career: “Chiropractic helps with recovery time and the way my body responds with the grind it takes.” 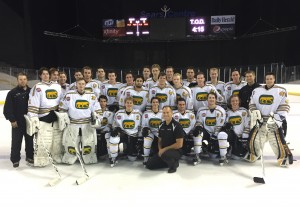 As team chiropractors for the Chicago Cougars Hockey team, Drs. Van Ness and Parkin successfully assist many hockey players with their recovery off the ice.  Brad Stoffers, head coach for the Cougars, states, “Dr. Van Ness has assessed each of our player’s functional movement capabilities and understands their individual deficiencies. He is using the knowledge and experience of his many years in practice to keep them all well-adjusted and performing at their best every single day….” Click here to learn more about how chiropractic care helps athletes perform at their best. To schedule an appointment with Van Ness Chiropractic, call 847-842-8070 or email info@vannesschiro.com.